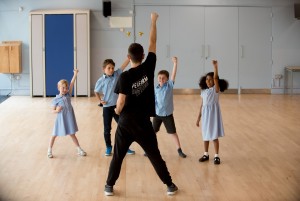 Some parents think that, when they send their child to Perform, it's about having fun,  singing, dancing and acting, and that's certainly true. But's it's also not the whole truth. Right from the start, Perform was always about much more than that. Back in 2000, the classes were designed from the ground up to equip children with social skills to help them with any situation in which they find themselves.

So, I was interested to read an article that my son brought back in his school magazine about the skills children will need in the world of tomorrow. You can read it here.

What I found most notable about The 10 skills you need to thrive in the Fourth Industrial Revolution is that every single skill listed is taught at Perform.

For example,  there can be no better way to problem solve or think critically than through role-playing scenarios and improvising. If you are asked to work through situations in a safe space, it can make doing so in real life so much easier. Yes, escaping a lion in the jungle is unlikely to ever happen but the logical structure of working through a problem is invaluable and really helps judgement and decision making and of course negotiation.

Being in a show means having to co-ordinate with others and to people manage.  And obviously it encourages being creative. Finally, if you’re playing a character, it’s definitely exercising your cognitive flexibility.

I put my confidence today down to my drama classes when I was a child. I was painfully under-confident before them but the classes transformed me and my aim is for our classes to have a similarly transformative effect. Running a business means using so many skills and I know that my original career as an actress has really helped me with this today. Not just confidence, but being flexible and thinking outside the box.

The ultimate ambition for our Perform children is to take them on a journey.  Every child's journey is unique but the outcome should be the same: that they feel confident within themselves to puruse whatever path they want in life.

And let’s face it, if they’re developing The 10 skills you need to thrive in the Fourth Industrial Revolution at the same time as having fun singing, dancing and acting… what's not to like?!